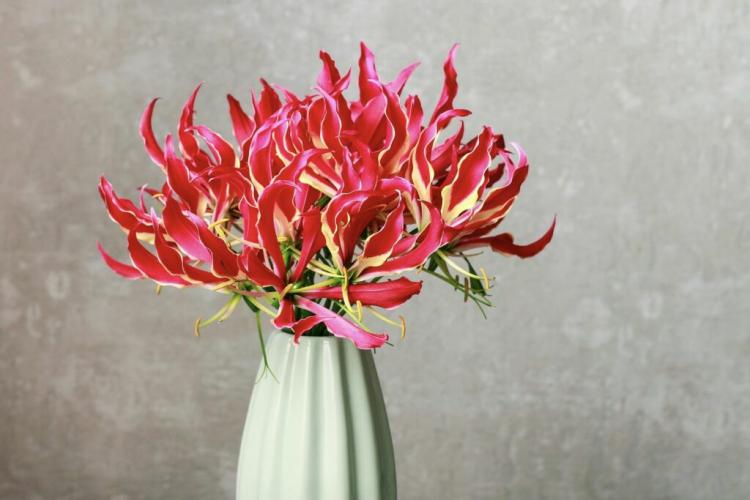 The crown of fame is a climbing lily that is both beautiful and poisonous. Therefore, despite the impressive petals, it is considered a rather unconventional houseplant.

The crown of fame can be used as a cut flower or a potted plant [Photo: Agnes Kantaruk / Shutterstock.com]

The crown of fame ( Gloriosa superba ), or Gloriosa for short, is a poisonous tub or houseplant that can also be used as a cut flower. It impresses with its flame-like, red flowers, which is why it is also called the magnificent lily. It belongs to the timeless family (Colchicaceae) and is related to the lantern lily, among other things.

Crown of fame: origin and characteristics

The crown of fame comes from Africa and Asia’s tropical rainforests, thickets and mountains. In Europe, the crown of fame adorns homes and gardens as indoor or container plants. As a cut flower, it also comes into its own in bouquets.

The crown of fame lives up to its name, because its flower shape resembles a burning crown. The fiery red petals resemble licking flames and end in a yellow throat. The flowering period of the beautiful lily lasts for the entire vegetation period. As long as it is light, humid and warm, flowers are formed. After the summer flowering, the plant retreats into the ground in autumn. At temperatures below 18 ° C, nutrients and reserve substances are shifted from the aboveground plant organs into the underground storage organs, the so-called rhizomes. So it survives the dry season in Africa and Asia. The rhizome is frost hardy to a maximum of -9 ° C. As a houseplant, temperatures below 18 ° C are often not reached, so that the crown of fame remains evergreen in exceptional cases. The gloriosa is a climbing plant and therefore needs a climbing aid or a trellis. Leaf tendrils arise from the tip of the glossy green, whole-edged leaves, with which it moves in a climbing manner. If there is no climbing aid, the crown of fame continues to creep. Overall, it can reach a length of one to two meters.

Tip: The crown of fame can be used as a cut flower. Its individual flowers have a long shelf life, only the flower stem is fragile. Therefore, it should be handled with particular care. 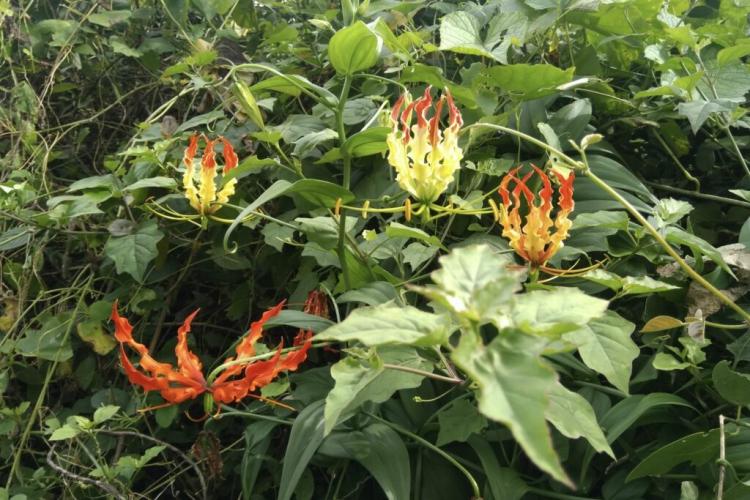 The crown of fame is a climbing plant [Photo: Tejas Prajapati / Shutterstock.com]

Planting the crown of fame

Successfully cultivating the royal-looking crown of fame is not as complex as its luxurious appearance would suggest. Below you will find out what to look for when planting the crown of glory.

Plant the crown of fame

In order to plant the crown of fame as a house or container plant, a suitable planter should first be selected. This should not be too small so that the storage organs can expand underground. In addition, the vessel should have a drainage hole for irrigation water, because the beautiful lily does not tolerate waterlogging. In order to avoid waterlogging, a drainage layer should also be created so that excess water can drain off better. To do this, about two to three centimeters of the vessel is filled with drainage material such as potsherds or expanded clay. The rest of the vessel is then filled with substrate. A loose, nutrient-rich garden soil, which is also permeable to water, offers optimal properties for the growth of the crown of fame. Alternatively, a suitable potting soil with exactly these properties can be used. A peat-free variant, such as our Plantura organic potting soil, is particularly sustainable. This consists of purely herbal ingredients and is therefore safe for all pets and garden animals. The rhizome of the crown of fame can then be inserted about three centimeters into the earth.

Insertion of the rhizome

The root is inserted across, so that the small buds point upwards. So that the buds are not damaged, the soil should only be pressed very carefully. Large rhizomes can also be divided so that each section has at least one bud. This way you get several plants inexpensively.

Important: You should definitely use gloves for all gardening work with the crown of fame, because the plant is highly poisonous! 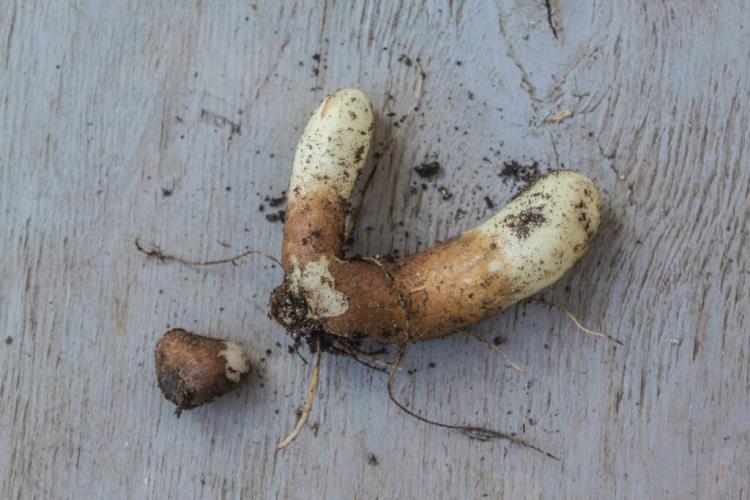 The rhizome of the Gloriosa is commercially available [Photo: Sarycheva Olesia / Shutterstock.com]

We cultivate the Gloriosa superba in planters either only indoors or outdoors during the summer. The plant should be placed in a sunny but sheltered place. But be careful, in direct sunlight the heat damages the leaves of the crown of fame. As an exotic plant, the Crown of Fame thrives particularly well at temperatures of 17 to 22 ° C, which should be kept as constant as possible. In addition, she is used to a humidity of 50 to 60% in her home country, so a place near the heater is unfavorable. You should use a climbing aid right from the start, as the shoots appear late in the year, but then grow very quickly. In order to achieve a dense vegetation of the trellis, the tendrils can be tied in a circle.

Tip: Are you wondering why the Crown of Fame is usually only for sale as a rhizome and not as a plant? The rhizomes are easier to transport and store than fully grown plants. In addition, the risk of damaging the somewhat delicate crown of glory is minimized. 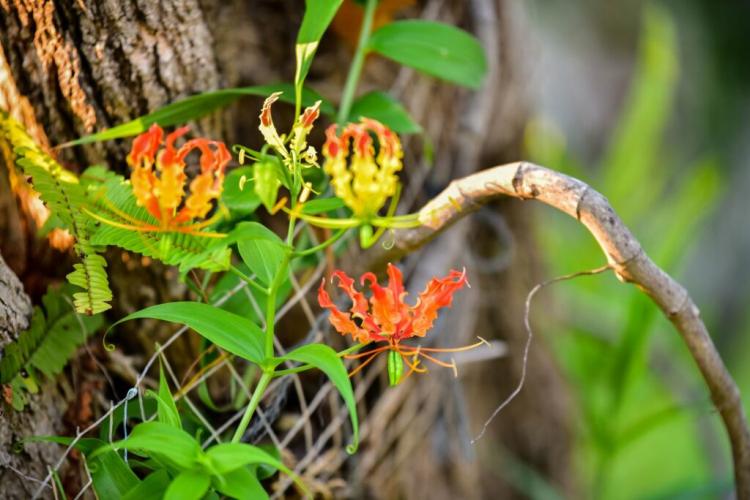 The crown of fame aims high with its leafy tendrils [Photo: adul24 / Shutterstock.com]

Care of the crown of fame

So that the care of the crown of fame succeeds, in addition to the correct irrigation, sufficient fertilization must be provided. The substrate of the crown of fame should be moderately moist at all times and never dry or soaked. Ideally, the plant is watered from above twice a week, but on particularly hot weeks it should be checked more often whether additional watering is necessary. It is also advisable to spray the leaves and flowers with lukewarm, lime-free water on these days to increase the humidity. In addition, air humidifiers can be set up in the apartment or in the greenhouse.
To support the growth of the crown of fame and the formation of flowers, fertilization should be carried out once a week during the growing season from March to September. Particularly important for the growth is the nitrogen content, which enables the rapid growth of the shoots of the crown of fame. Liquid fertilizers that guarantee efficient nutrient distribution are suitable for weekly use. Our organic flower & balcony fertilizer, for example, contains the most important nutrients in a purely organic form and is pleasantly odorless because it does not contain any animal ingredients.

Tip : If the plant begins to store nutrients and storage substances in the rhizome, it becomes yellow and unsightly. It should then neither be watered nor fertilized. When the crown of fame is completely dry, the relocation is complete. Only then should the leaves and stems be removed. In spring, aphids like to attack young shoots of the crown of glory. To avoid this, you should regularly check the shoots and undersides of the leaves of the animals. Make sure that you are wearing gloves again, otherwise your hands may become red . In addition, the natural enemies of the aphid can be promoted with dead wood ticks or insect hotels. If it is too humid in summer, the crown of fame is also prone to root rot. Therefore, you should always make sure that the potting soil is not too wet. 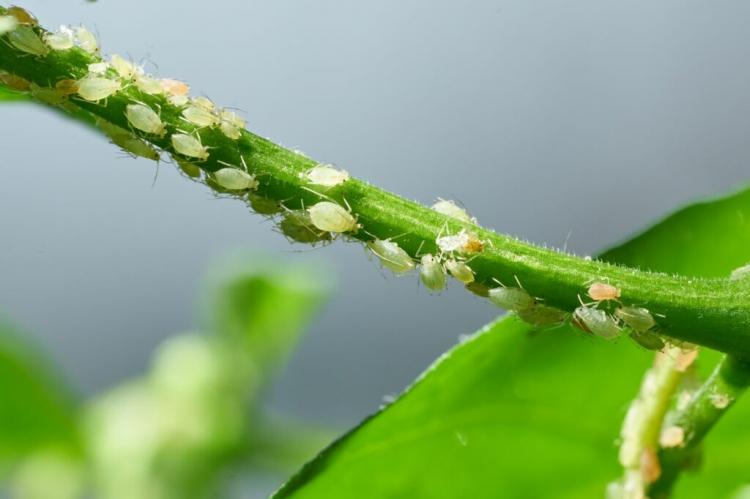 After the plant sheds its leaves, the crown of fame can be propagated. To do this, the rhizome is simply dug up in autumn or spring, divided with a knife and replanted as already described. Each piece of rhizome should have at least one bud. Under no circumstances should you forget to wear gloves.
Propagation via seeds is also possible, but these have a strong germ inhibition. It can take over a year for the seed to start germinating. Therefore, this method of increasing the crown of fame is recommended only to patient gardeners.

To overwinter the crown of glory, the tuber can remain in the bucket and put in a place with a temperature of 10 ° C. During this time there is no fertilization or watering. Shortly before the new shoots in March, the tuber must be repotted in fresh substrate. The rhizome is replanted at a depth of 3 cm and the plant appears again in full splendor after 6 to 8 weeks with sufficient irrigation and fertilization. 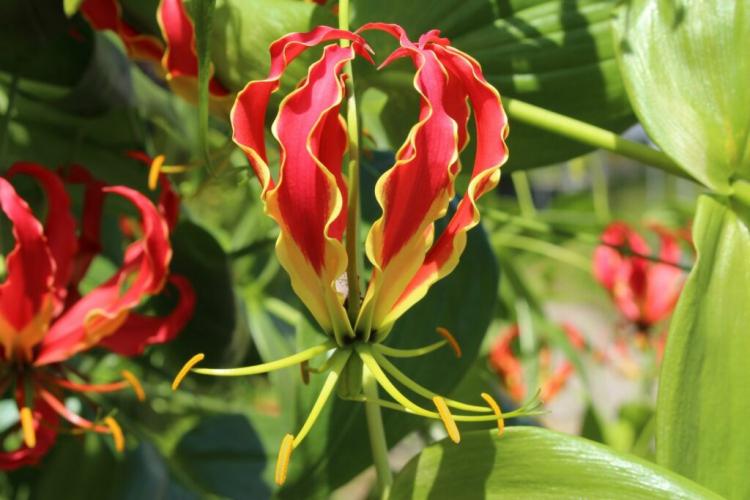 When the winter is over, the crown of fame forms beautiful flowers again [Photo: RukiMedia / Shutterstock.com]

Is the crown of fame poisonous?

All plant components of the Crown of Fame are highly poisonous. Their tuber in particular contains what is known as colchicine, a poisonous alkaloid. If you experience symptoms such as difficulty swallowing, vomiting and gastrointestinal discomfort, you should consult a doctor immediately. Colchicine intake can be fatal.

Caution: The ingestion of parts of the plant from the Crown of Fame can be fatal. It is unsuitable as a houseplant for families with children.

Just like the crown of fame, the autumn crocus belongs to the timeless family. In our article you will learn how to recognize, plant and care for autumn crocus in the garden and whether they are just magically beautiful or also poisonous. 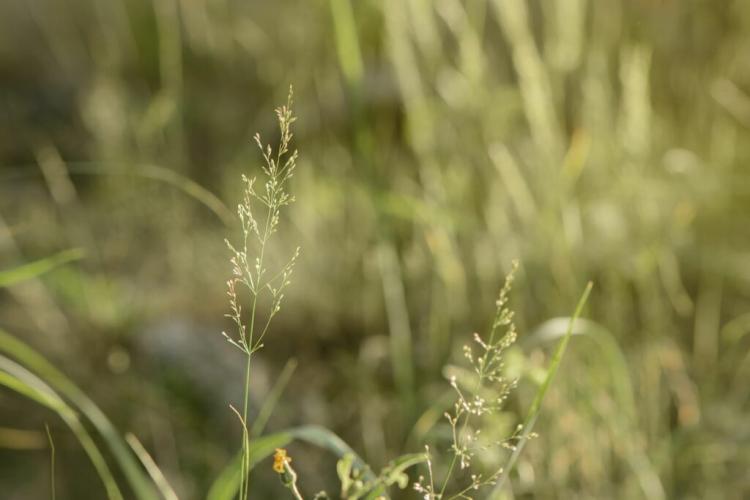 Poa nemoralis , also known as grove bluegrass, is often used in seed mixtures for shade lawns. We show why this plant is particularly suitable for this and how you can benefit from its advantages in the garden. Grove bluegrass is also suitable for shady locations [Photo: Nau Nau / Shutterstock.com] You have probably never… 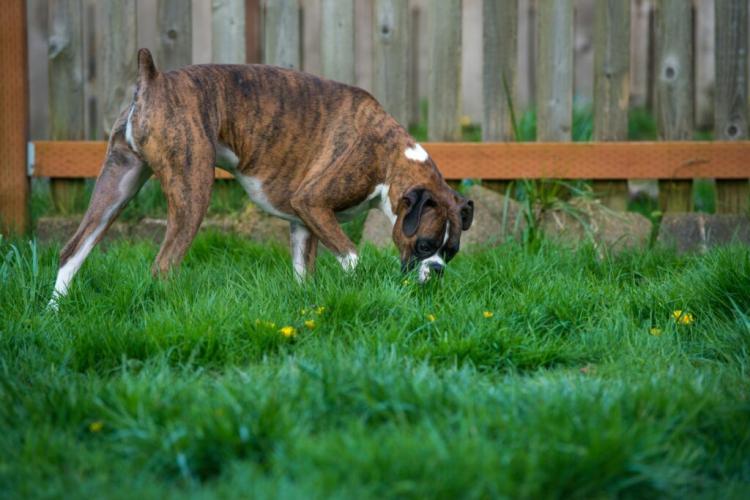 Organic fertilization benefits people, animals and nature. We show why you should supply your lawn with organic lawn fertilizer and what advantages it has. Animals also feel good on an organically fertilized lawn [Photo: Anna Hoychuk / Shutterstock.com] The use of organic fertilizers represents a kind of revolution in fertilization: it has long been known… 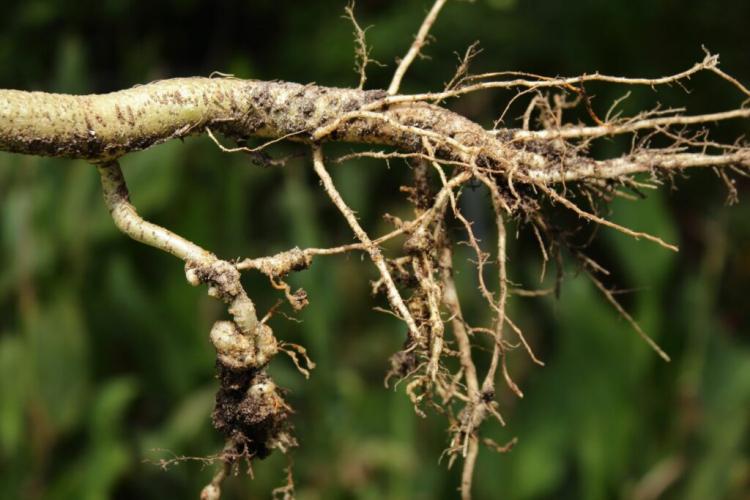 Some nematodes harm plants , while others are useful against plant pests. We show how harmful nematodes can be controlled. Nematodes infest the roots of vegetable plants [Photo: Jean Faucett / Shutterstock.com] The nematodes, also known as roundworms, are extremely problematic pests, both for the hobby gardener and for the farmer. While in the past… 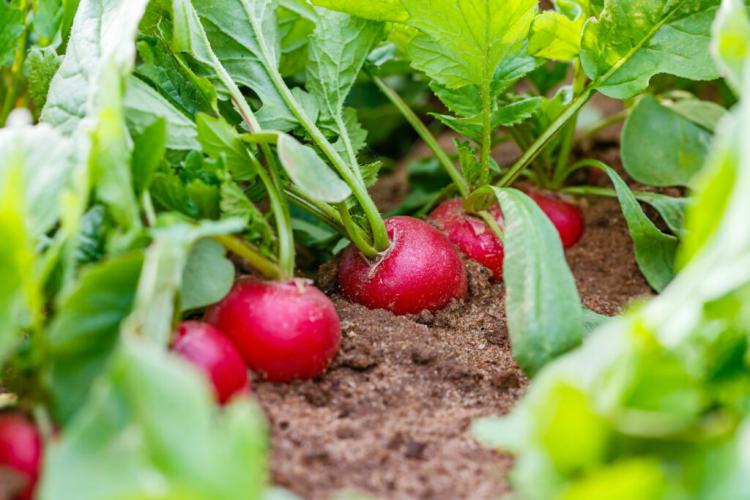 The cultivation of radishes usually works without any problems. We show you what to look out for when planting or sowing radishes. Radishes can easily be grown in the garden or on the balcony [Photo: nnattalli / Shutterstock.com] Radishes are at the top of the list of the most popular vegetables in summer. Whether in… 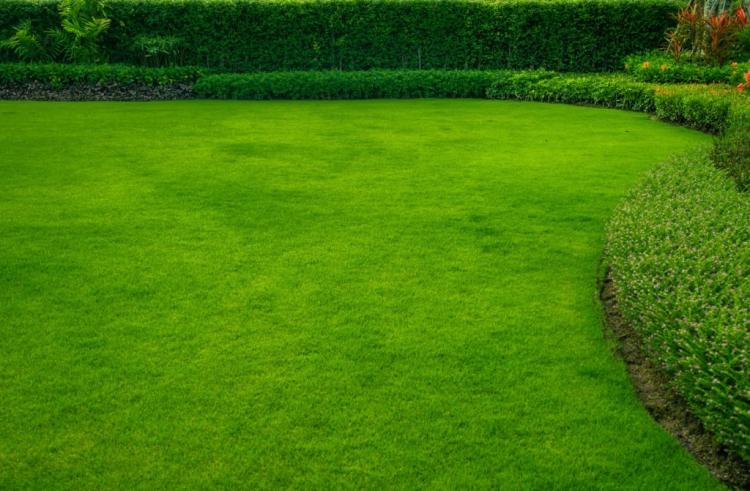 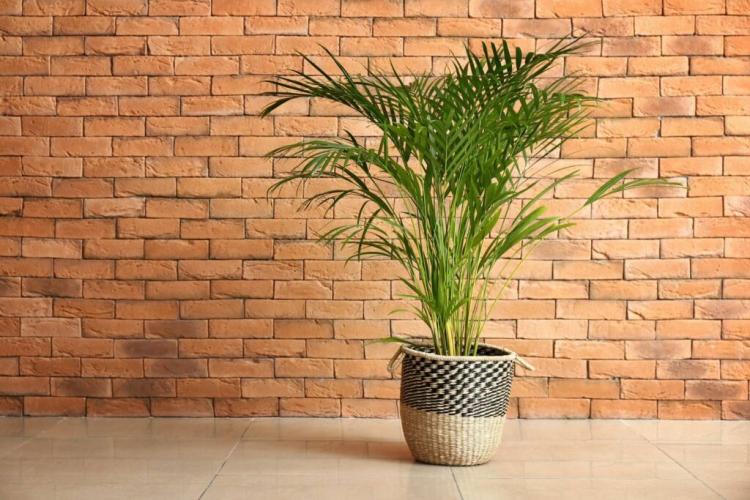