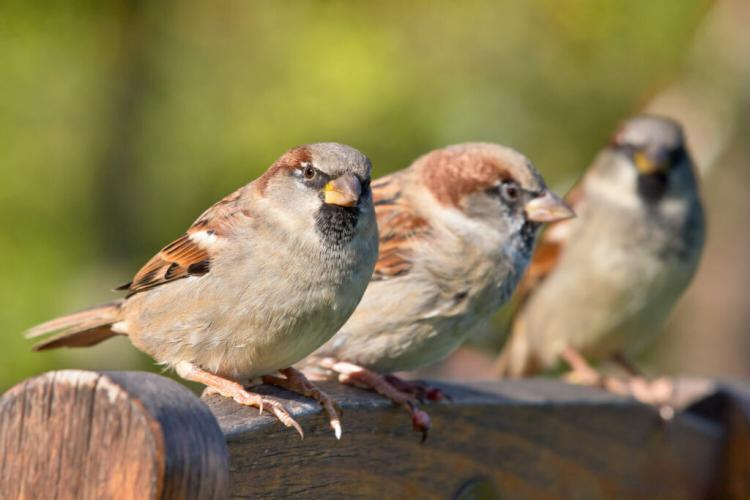 The house sparrow or house sparrow ( Passer domesticus ) is one of our most famous songbirds. The small, brown fellows are real followers of culture and have adapted perfectly to human habitats. They cavort in settlements and cities and whistle happily from the roofs – so the familiar picture. In fact, our little house sparrows are no longer doing so well. For some years now, the number of birds has been declining so much that the species is now on the warning list on the Red List. How you can support the house sparrow in your own garden and everything else you need to know about the little songbird can be found here with us.

This is how you recognize the house sparrow

The house sparrow can be recognized by its compact shape and typical strong beak. The backs and wing covers of the birds are striped brown-black and the underside gray. The crown and cheeks of the house sparrow are also gray. The species can only be confused with the tree sparrow. This differs from the house sparrow in that it has a chocolate-brown part and small, black patches on the cheek.

Note: Incidentally, there is no difference between 'sparrow' and 'sparrow'. The two terms refer to the same group of birds. However, the scientifically correct term is 'sparrow'. 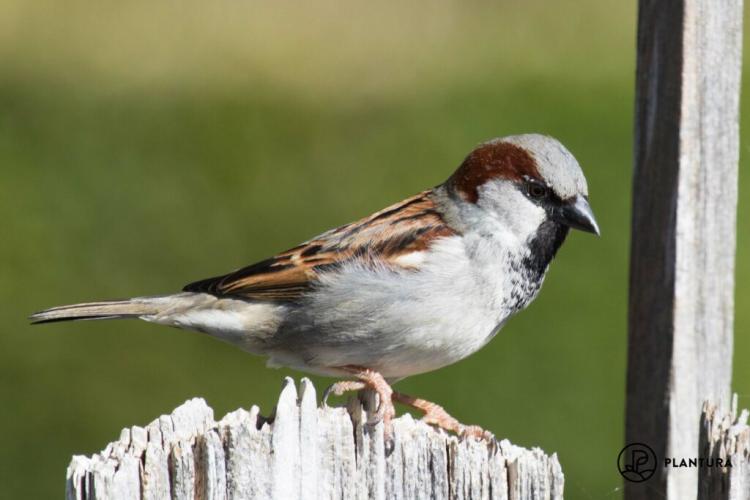 House sparrows are among the most famous songbirds

How does house sparrow singing sound?

The song of the house sparrows consists of an indefatigable “chilp”, which is continuously recited from a high vantage point. So the sparrows don't just literally whistle from the rooftops. When excited or in danger, the house sparrows also utter wild shouts: “Tscherret-herett”.

A sound recording of the house sparrow song can be found here:

How do female and male house sparrows differ?

Female house sparrows are not quite as conspicuous as the males. While in the males a brown stripe behind the eyes frames the light cheeks, the face of the females is almost uniformly gray. In addition, the throat of the males is adorned with a black stripe that extends into a more or less large patch on the chest. This mark is also missing from the female specimens.

Note: By the way, the black patch on the chest of the males serves as a status symbol. Its size is related to the fighting strength of the males and thus also to its dominance over others. In the plain dress – outside the breeding season – the breast spot is reduced and the males appear a little more inconspicuous. 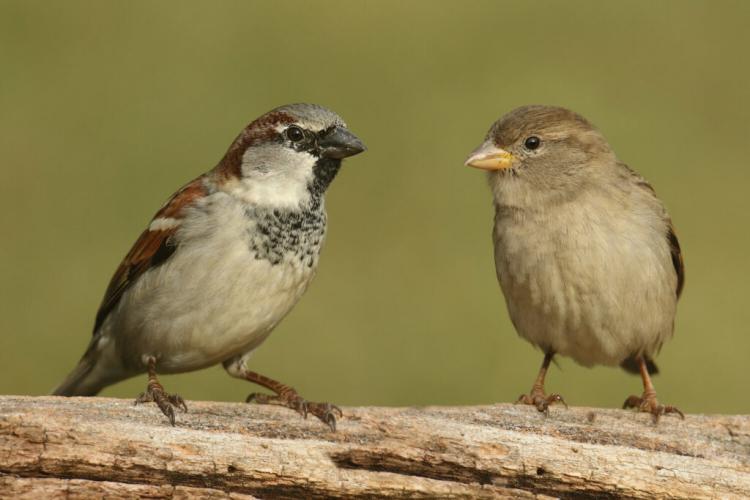 How do you recognize a young house sparrow?

Young house sparrows are the image of their mothers. The male juveniles do not show any of the typical characteristics either. However, the young house sparrows change into their adult plumage quite early. Less than eight weeks after hatching, they lose their youthful appearance and shine in their finished plumage before winter sets in. 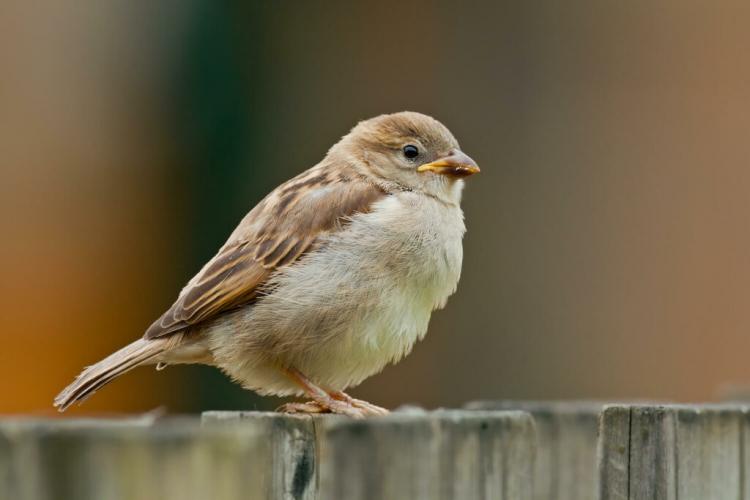 House sparrows lay between three and six eggs per nest. These are about 1.5 centimeters tall, of a white or gray base color and covered with brown speckles. The eggs are laid in a spherical, messy nest made of stalks, twigs, leaves, and other available materials. The nest cavity is also padded with soft feathers. 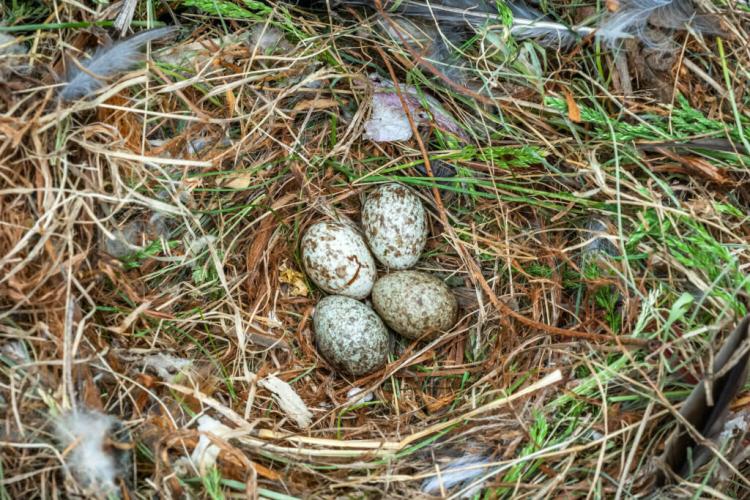 Which habitat does the house sparrow prefer?

Where does the house sparrow build its nest?

House sparrows are very creative when it comes to choosing a nesting site. In nature, they mainly nest in tree hollows or old nests of woodpeckers or swallows. As a culture follower, however, they mainly breed in building or wall niches, under roof tiles or in nesting boxes. The size of the nest depends on the available cave and can vary greatly. From time to time free-standing nests are also built. House sparrows also like to breed in smaller colonies. 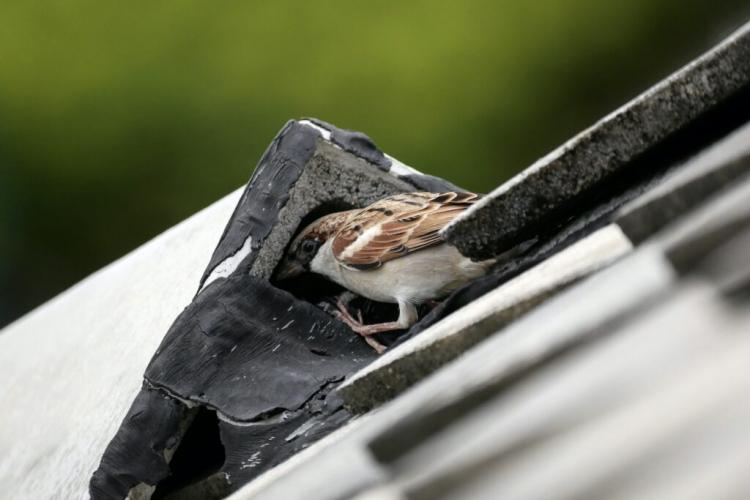 When is the house sparrow's breeding season?

The breeding season of the house sparrow begins in March and can continue until late August. During this time, a breeding pair can raise up to four broods. The eggs are incubated for about two weeks after being laid. In cold temperatures, however, the incubation period can be longer. After hatching, the young birds are fed in the nest for about 14 days. Then the little sparrows leave the nest, but are still supplied with food. After another two weeks they are completely independent.

Where does the house sparrow spend the winter?

House sparrows are resident birds. This means that they also spend the winter in their breeding area and never stray far from their territories. In winter, however, the birds come together to form large flocks that go for food together. 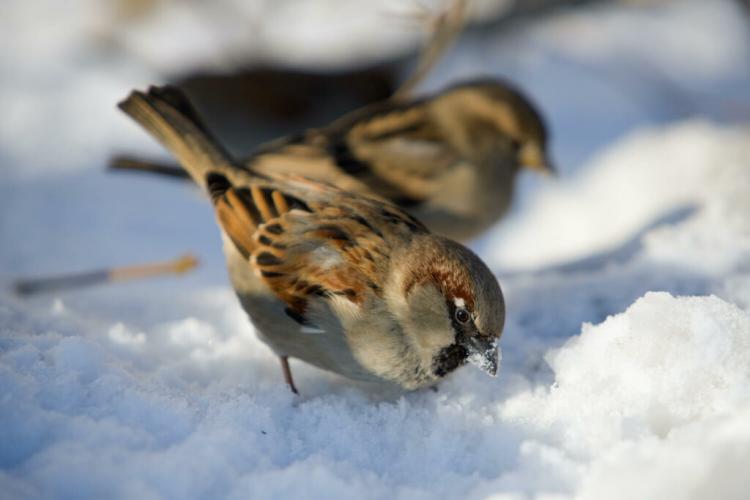 Note: House sparrows form lifelong singles. Once a breeding pair has found each other, they stay together for many years and often return to the same nesting site every year.

Support the house sparrow in the garden: this is how it works

The increasing decline in house sparrows is alarming. As a result of the renovation of old and new buildings, the birds have fewer and fewer nesting opportunities. And the food supply is also decreasing. Find out here how you can support the house sparrow in your own garden.

What do house sparrows eat?

If you want to help with food, the question arises: What do the sparrows eat? The small house sparrows feed mainly on seeds. Throughout the year they can be seen in small groups looking for food in fields. But leaf buds and smaller insects are also used. During the rearing of their young, the sparrows mainly collect insects, as the proteins they contain are important for the development of the young birds. 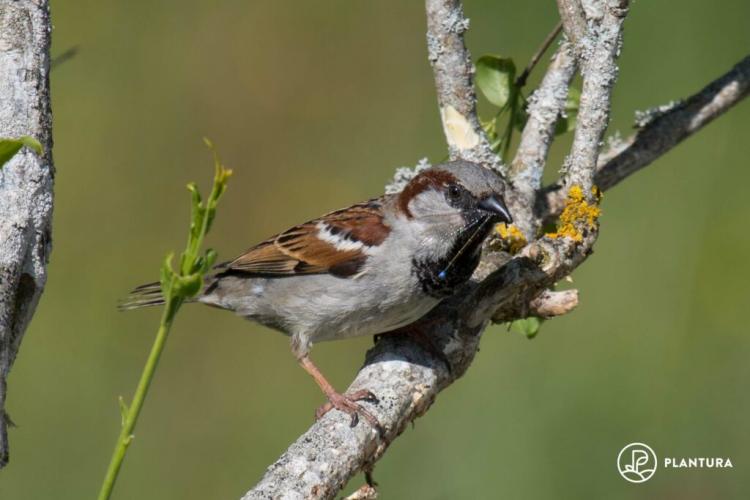 House sparrows also like to hunt insects, especially during the breeding season

If you want to set up a feeding station for the birds in winter, you should use a classic grain feed. Sunflower seeds and other seeds are gladly accepted. But the sparrows do not disdain mealworms either. A good choice for winter feeding is our Plantura litter for wild birds with many high-quality seeds that offer plenty of energy for the cold season.

Which nest boxes are suitable for house sparrows?

Tip: You can easily build such a nesting box yourself and easily turn it into a handicraft project for the whole family. 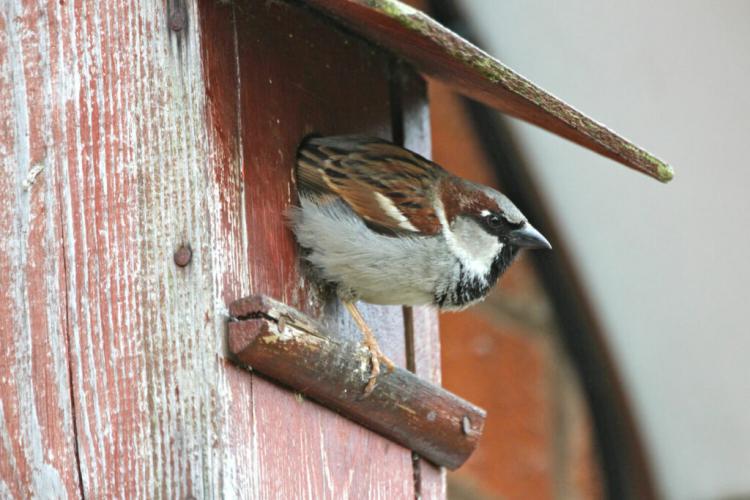 How can you additionally support the house sparrow?

During the breeding season, house sparrows increasingly depend on insects for food. Avoid using chemical sprays, which not only reduce the supply of insects, but can also poison the birds through the food chain. You can also bring new life into your home by creating an insect-friendly garden. Creating a flower meadow, for example with our Plantura beneficial insect magnet, offers new living space for a large number of small gardeners and also makes our feathered friends happy.

Incidentally, perennials are particularly helpful if they are only cut back after winter. The seeds of the thistle, adder's head or the wild teasel and the insects that overwinter in the stems are natural sources of food for the birds.

Numerous other bird species, such as the white wagtail or the house martin, enjoy a lively and bustling garden. 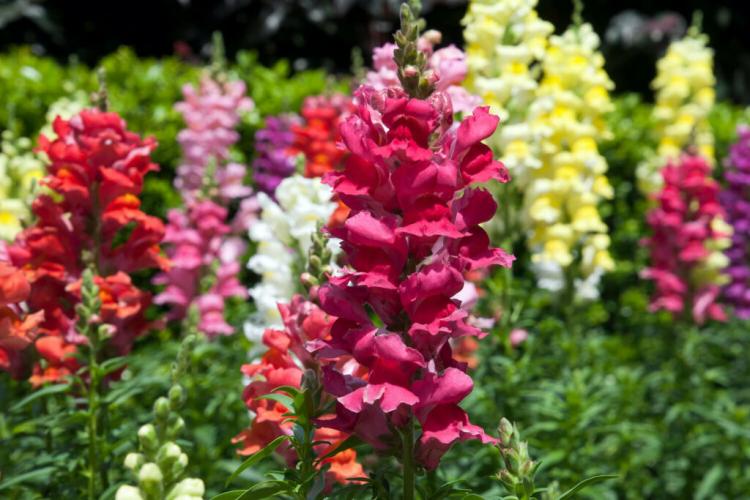 The snapdragon enjoys continued popularity in cottage gardens and flower meadows. How it is properly planted, cared for and propagated, learn from this article. Snapdragons have a wide range of flower colors [Photo: demamiel62 / Shutterstock.com] In addition to marigolds, dahlias and peasant roses, the snapdragon ( antirrhinum ) is an integral part of the… 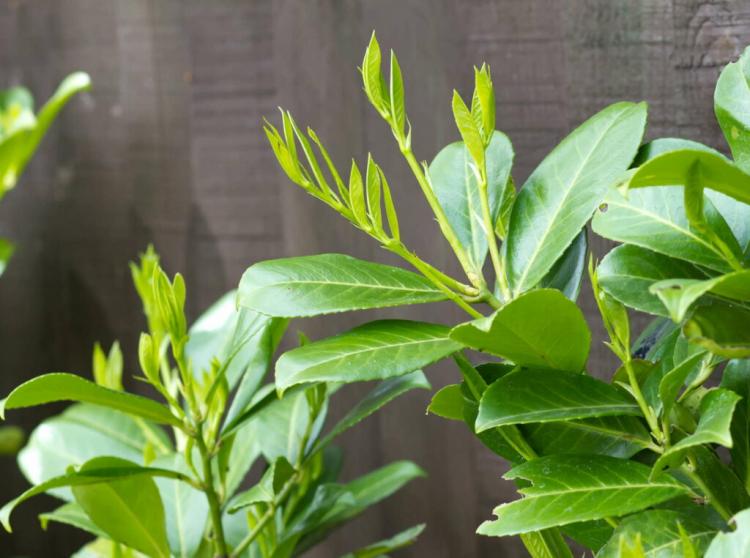 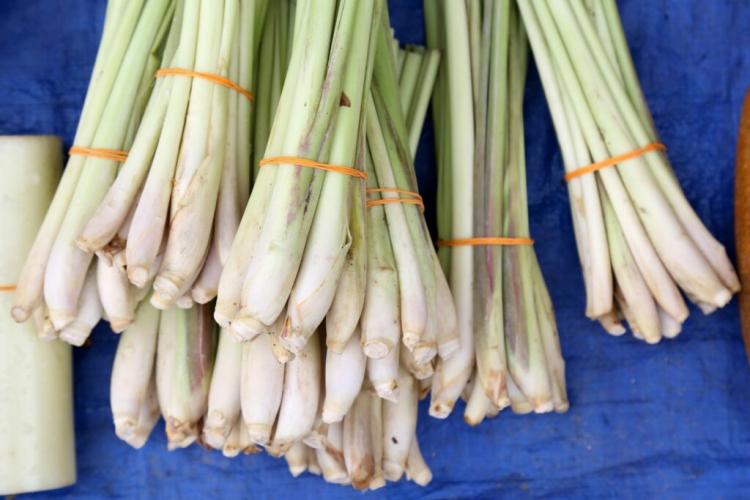 Lemongrass can also be grown successfully here. But how do you harvest and store it correctly? Find out here! Lemongrass is often bundled after harvest [Photo: Arqam Bin Nasir / Shutterstock.com] Harvest lemongrass properly Lemongrass is an evergreen, herbaceous plant and can therefore be harvested all year round. To do this, the stalks are simply… 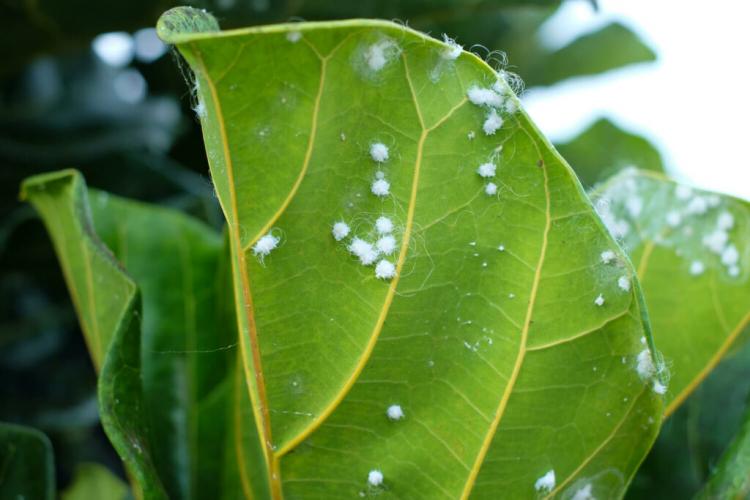 No houseplant owner likes to see the little white lice. We reveal the causes of lice on indoor plants and how the aphids can be combated naturally. Aphids, such as mealybugs in this case, can also be found on indoor plants in the apartment [Photo: daguimagery / Shutterstock.com] Aphids are often uninvited guests not only… 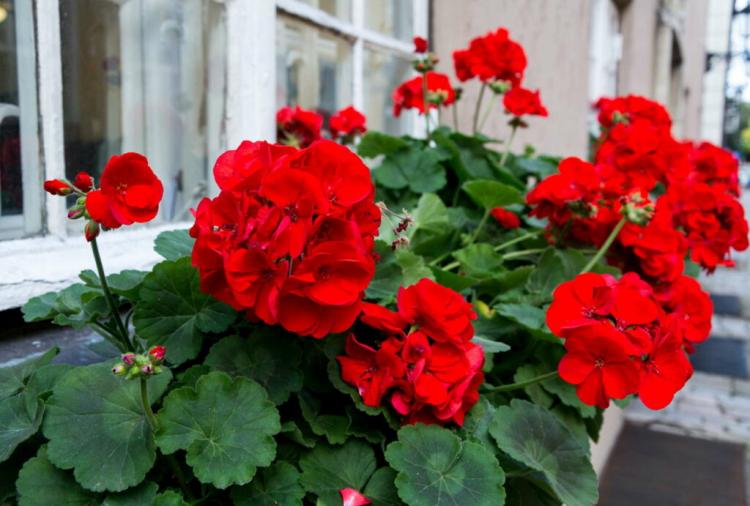 Geraniums need to be properly fertilized so that their flowers can shine. We have compiled all the important facts about fertilization for you. The flowers of the geranium make it a real heavy eater who is happy about regular fertilization [Photo: Anna Minsk / Shutterstock.com] Pelargoniums ( Pelargonium ), also popularly known as geraniums, with…