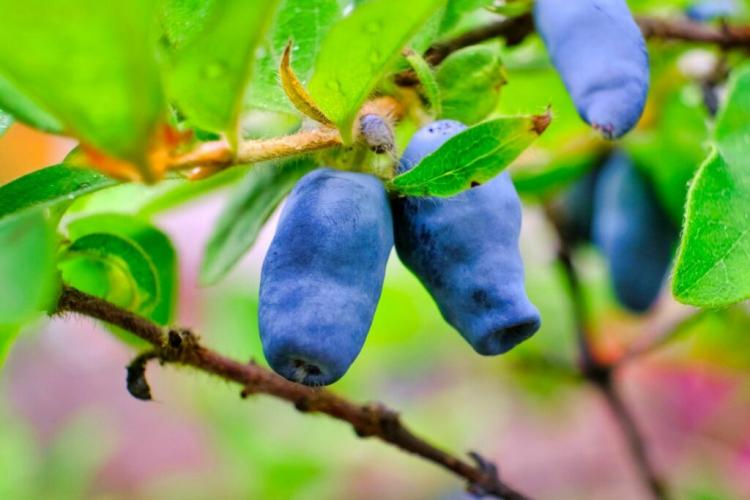 At first glance, the corn berry or honeyberry looks like a blueberry. So what is a honeyberry exactly? We'll tell you about the properties and special features of the little blue berry.

The elongated honey berries stand out due to the special shape of their fruit [Photo: Nagaev / Shutterstock.com]

You can often find Mayberries under the names honeyberry, Kamchatka honeysuckle, bilberry, Siberian blueberry or Siberian blueberry. The summer green berry bush of the mayberry is becoming increasingly popular in the home garden with its blueberry-like fruits. The May berry also impresses with its easy-care and robust nature.

May berry: origin and characteristics

The may berry ( Lonicera caerulea var. Kamtschatica ) originally comes from Siberia, to be more precise from the Siberian peninsula Kamchatka, from which the name Kamchatka honeysuckle also comes from. The plant, which belongs to the honeysuckle family (Caprifoliaceae), grows there mainly in mountain forests at higher altitudes.

Due to their origin, the Mayberry blossoms and the wood are extremely robust and frost-hardy. The yellow-white flowers in pairs can be seen from March. 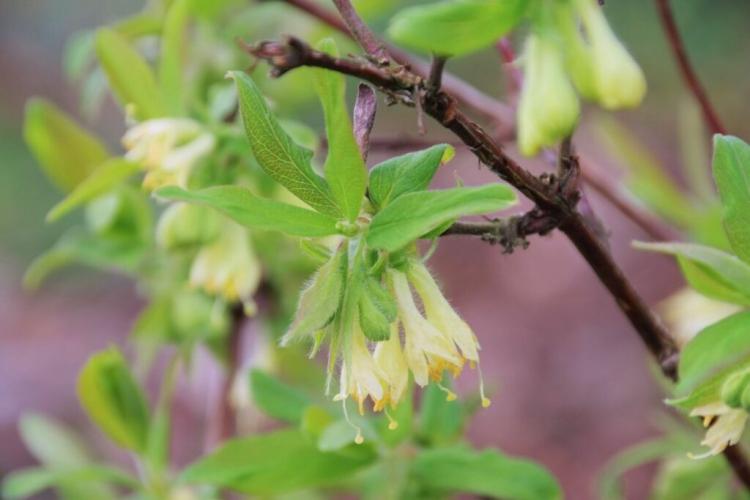 The shape of the honeyberry blossom is reminiscent of a bell [Photo: LianeM / Shutterstock.com]

The leaves of the berry bush only grow after the flowers. From these the 1 to 1.5 centimeters large, cylindrical, dark blue berries develop. These are also similar in taste to the cultivated blueberry, but the Mayberry has a lower yield. A special feature, however, is the early ripening, often as early as May, which makes the Mayberry the first soft fruit of the year. The corn berry size is also suitable for smaller gardens. The shrub grows up to 1.5 meters high, but also likes to grow in width.

The most delicious varieties of May berries

There are different varieties of lily berries, which can be divided into early and late varieties, although the difference is only slight. The best known honeyberry varieties are: 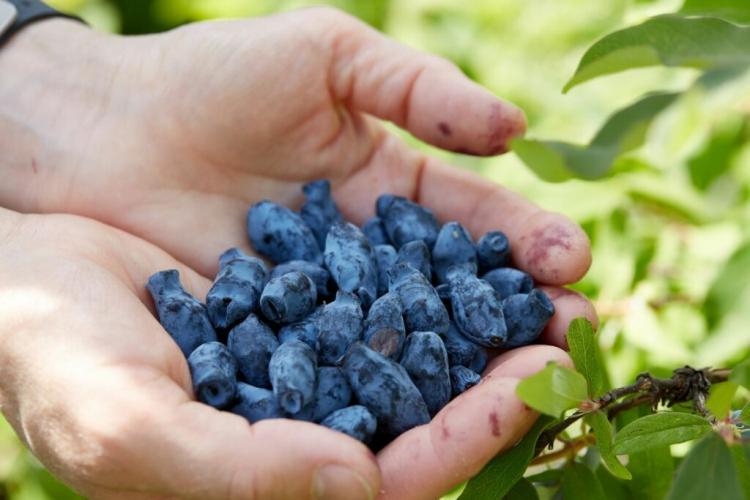 The Siberian blueberry varieties often differ in the size of their fruits [Photo: Dmitry Melnikov / Shutterstock.com]

The honeyberry bush is very robust and undemanding, which is why it grows satisfactorily in partial shade and in full sun as well as on light to medium-heavy soils. Thus, the honeyberry location can be chosen quite freely, but a sunny and not too nutrient-poor location is beneficial for the harvest. May berries also prefer consistently moist locations.

When you plant the honeyberry, temperatures shouldn't be below freezing. Planting in spring or autumn is ideal. If you want to plant the shrub now, you should dig a hole that is at least 1.5 times the size of the root ball of the honeyberry bush. The root ball can be loosened a little before the honey berries are inserted. Normal garden soil is suitable for planting. If you want to loosen up the soil and ensure a good humus supply and a better harvest, you can use a more special soil. Our peat-free Plantura organic universal soil is ideal for soft fruit and can be used in a variety of ways in the garden.

Tip: If you plant Mayberries together with currants and autumn raspberries, with a bit of luck you can harvest berries from late May to frost.

When planting several shrubs, a distance of at least 1 m should be maintained. The yield of May berries can be increased if different varieties pollinate each other. However, the Mayberry is also able to fertilize itself. Solitary mayberry bushes also bear fruit. After planting, the shrub is adequately watered. 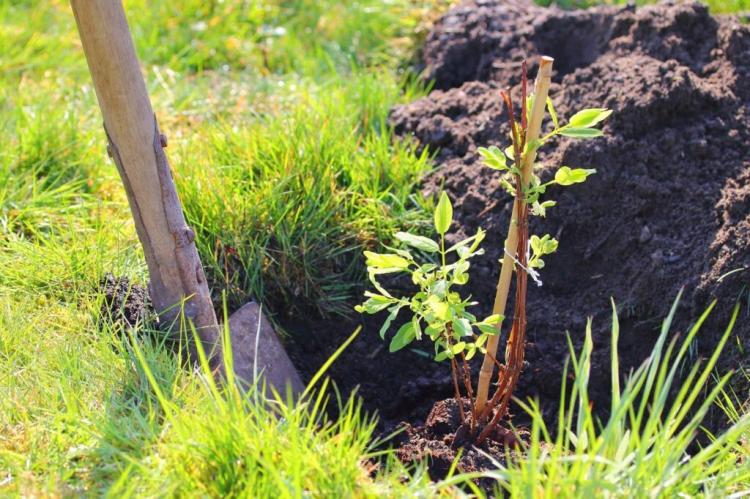 If you plant your may berries, a sufficiently deep hole must be dug beforehand [Photo: Kletr / Shutterstock.com]

Planting Siberian blueberries in a tub : Thanks to their compact size, it is easy to plant the Siberian blueberry in a tub. The plants can also be overwintered outdoors near the house. To protect the fine roots in the pot from freezing through, the tub can be packed with insulating material.

In order to reap a rich harvest, the Siberian blueberry also needs care. It is easier to care for than the cultivated blueberry, but there are a few points to consider. In the case of longer dry phases, the May berries should also be watered, as they love evenly moist soil. If you want to harvest a lot of berries every year, you should fertilize your may berries additionally. Here we recommend fertilizing in the spring before sprouting and a second in summer before fruiting. You can use compost or a good mainly organic fertilizer such as our Plantura organic universal fertilizer. With its natural long-term effect, this is also suitable for the sustainable supply of May berries.

You don't have to be afraid of frost damage with the honeyberry, due to its origin in Siberia, the plant itself can even withstand temperatures down to -45 ° C.

After the harvest in June, you can cut the may berries to rejuvenate them. In the first 3 years you should only remove weak shoots that are too close together. From the 4th year onwards, the oldest shoots are cut off near the ground every year after the harvest and the strongest 8 to 10 of the young fruit shoots are left to stand. These then deliver the new berries next year. 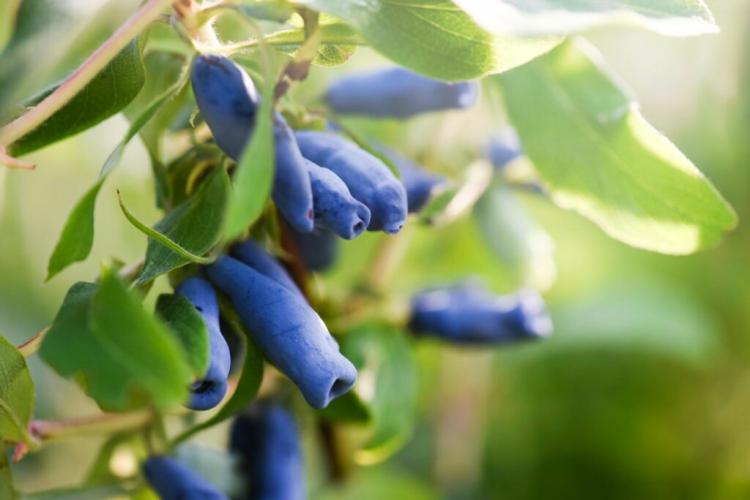 With the right care, the Mayberry brings tasty berries early in the year [Photo: Krasula / Shutterstock.com]

May berry does not bear: what to do?

Your may berries should bear fruit after 3 years. Is your Mayberry not wearing? There are a few possible reasons for this. As already mentioned, you don't need a second plant to fertilize May berries, but you often need a second variety so that you can harvest something. It is also possible that the Mayberry location is too shady or that the plant was not sufficiently watered during long dry periods. If there are no flowers to be seen and the foliage shows signs of deficiency, it may be useful to fertilize the may berries again or to improve the soil. 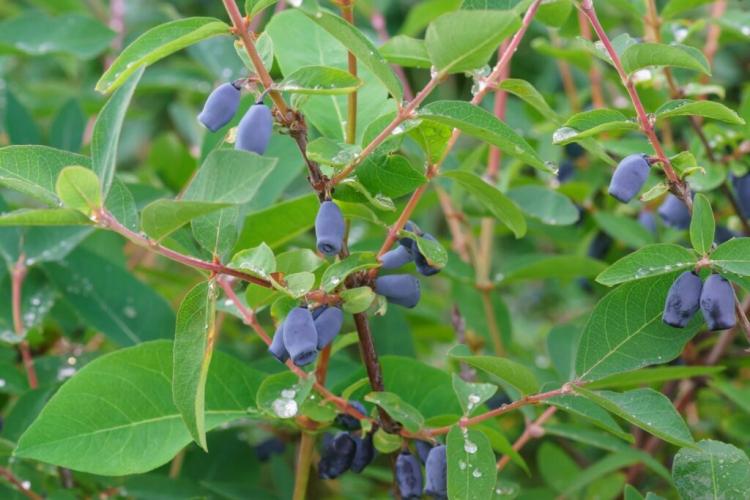 For a rich honey berry harvest, a few points should be considered [Photo: Garmasheva Natalia / Shutterstock.com]

The may berries can also be propagated. Cuttings, which can be cut in the summer, are used for the May berry propagation. For this purpose, about 20 cm long, young shoots without flowers or fruits should be cut off and placed in pots with loose soil. These can be overwintered until spring in a cool and light, but frost-free place and then planted out in the garden. If the cuttings are placed in nutrient-poor soil such as our Plantura organic seed and herb soil, they can easily form new roots with sufficient moisture. It is even easier to multiply by means of a sinker. A shoot of the plant is bent down and fixed in the ground so that it can take root.

Harvest and use: are May berries edible?

As the name suggests, the maize berries are often harvested as early as the end of May. The Mayberry is edible and can be consumed directly from the bush. The taste is similar to that of blueberries, but the honeyberries have a shorter shelf life and should be consumed immediately. The most interesting ingredients for lambs berries are vitamin C, potassium and antioxidants, which make them a true superfood. The berries are also used in juices, jams or compotes. 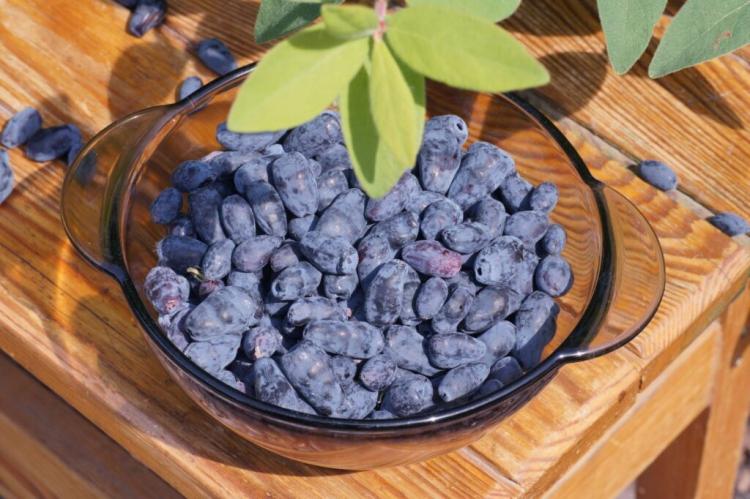 Common pests and diseases on the Siberian blueberry

The Siberian blueberry is only slightly susceptible to diseases and pests. Occasionally there is an infestation with frost tension. However, you should be careful with bird damage. The small berries are very popular and should therefore be covered with nets for many birds in the garden so that they can also harvest something.

Would you like to discover even more special types of berries? In our post, we'll reveal 9 unknown berries that you've probably never heard of. 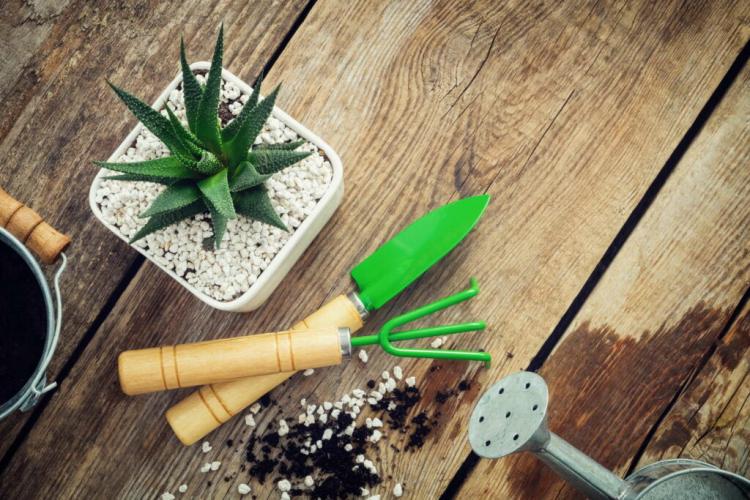 Succulents are generally undemanding. Nevertheless, you should know certain tips and tricks in order to really meet their requirements. Succulents also enjoy a pot with fresh substrate [Photo: Chamille White / Shutterstock.com] Who does not know her? The water-storing succulents are popular houseplant and can also be seen in Germany with some species in gardens…. 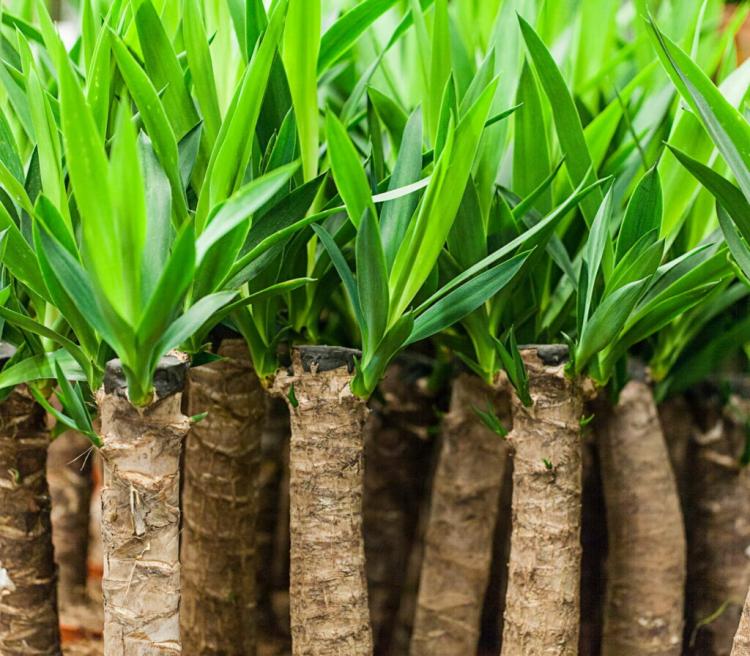 The yucca palm is an indispensable part of any living room. We have compiled all information about the popular indoor palm for you. Yuccas are reliable houseplants that can thrive in your own four walls with little effort [Photo: Alexeysun / Shutterstock.com] Yuccas ( yucca) (also known as palm lilies) are reliable indoor plants that… 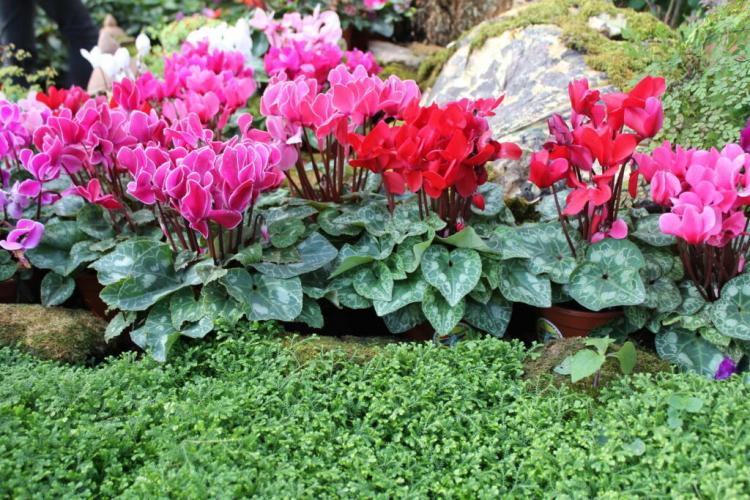 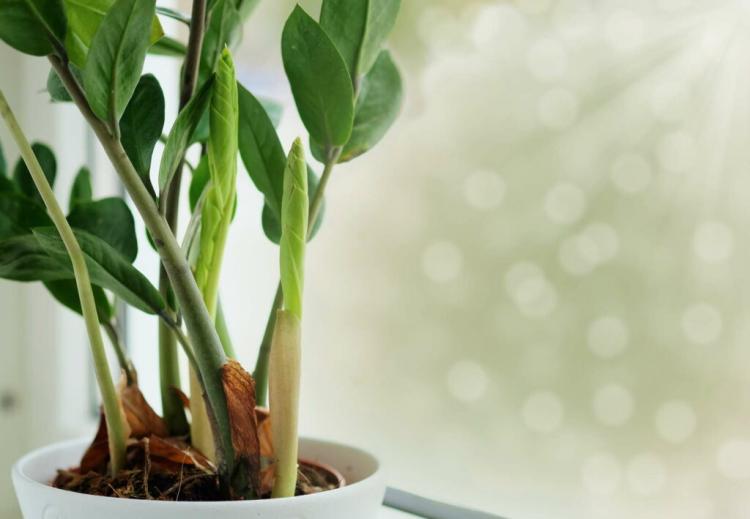 Not only the plants outside, our indoor plants also need extra nutrients. We show how and with what best to fertilize indoor plants. So that indoor plants can thrive vigorously, they should be fertilized regularly [Photo: KhunYing / Shutterstock.com] Every plant, whether garden or houseplant, needs nutrients to survive. An insufficient supply of nutrients can… 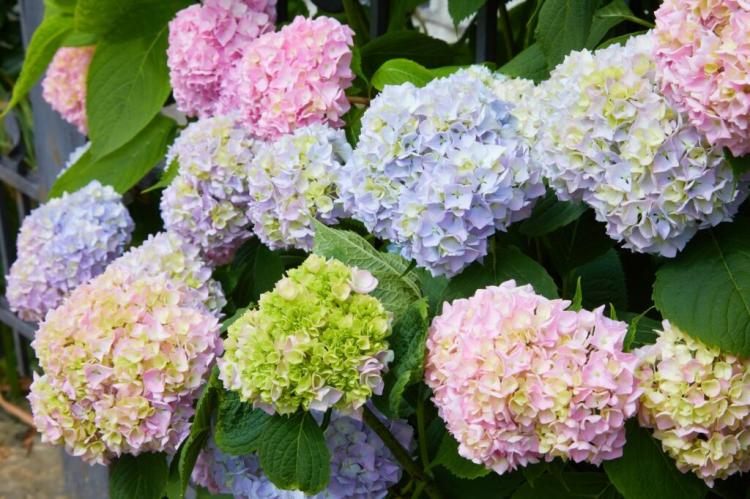 Here you will find an overview of the most beautiful hydrangea species and varieties: From 'Endless Summer' to 'Annabell' and Co. we present our favorites. The genus of hydrangeas ( Hydrangea ) includes a large number of different species. They all have their natural origin on the continents of America or Asia. All relevant species… 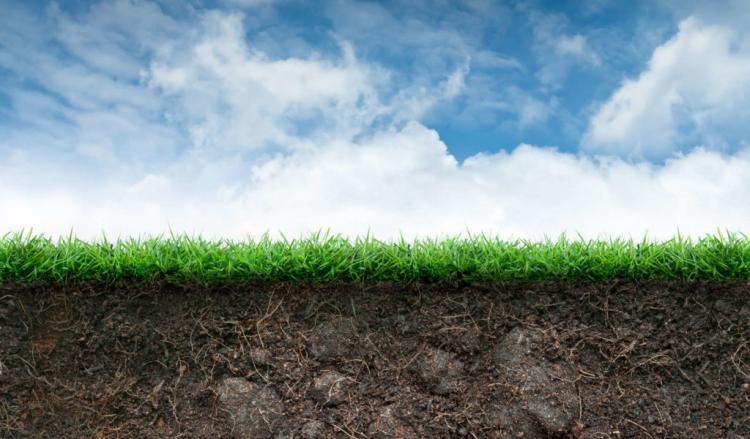 The right time to fertilize the lawn in spring and autumn is of great importance. We reveal when and how often the lawn should be fertilized. As spring or autumn is approaching, most lawn owners will be aware that the lawn must now be fertilized to keep it healthy, green and dense. We explain the…